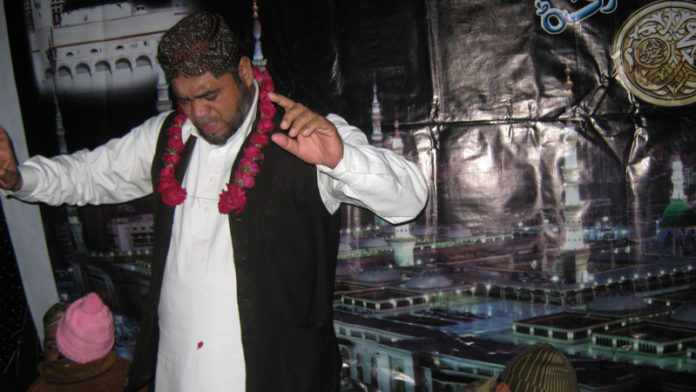 A Qalandar is an individual who has the powers to go outside the physical empire. The Qalandar experiences the bliss and joy of the nearness of the Creator. So he perceives the whole Truth. The Qalandar is free from the grip of time and space. All creatures become obedient to him. As the Qalandar is linked with the Divine Being, he is perfected beings. He doesn’t experience negative desires of greed, power and control. He has the conduct of the prophets and serves humanity according to the Divine Will.

Syyed Shahid Rasool Soharwardi was presiding the program. Mr. Mushtaaq Ali Khan Suharwardi (another follower and Caliph of Sarkar Basha) was present in this gathering. The program started by the recitation of Holy Quran. Afterward, Qari Amjad Ali Bilali Brothers presented an excellent performance in their unique style. Number of people including women and children were attending this spiritual meeting. Crowed enjoyed very much during their performance.

In his keynote speech Syyed Shahid Rasool Soharwardi told that Sufis and Prophets are alive as martyrs never die. Martyrs fight against the enemies of their country and religion, Sufis and Prophets fight against their Egos. And the greater war is against Ego. Sarkar Basha addressed in very impressive style and people learnt a lot from his speech. Program finished at 11 pm by the prayer of Sarkar Basha.

The Special Milad Ceremony in a Church

10 Beautiful Places of Saudi Arabia You Must Visit